Below is the obituary that we had posted in the local paper of Simi Valley, the Ventura County Star. It will be available for short time on their website, but I have screen captured it below as a memento for this website. Please do not sign the guestbook on the Ventura County Star because it will be taken down in a month, so please sign the guestbook on this website at https://bernadettefranck.com/guest-book if you have not done so already. You can also upload pictures here, or email Suzette if any issues with the website. We really appreciate all the prayers and nice condolences for my mom. Thank you everyone for all of the support during this difficult time. 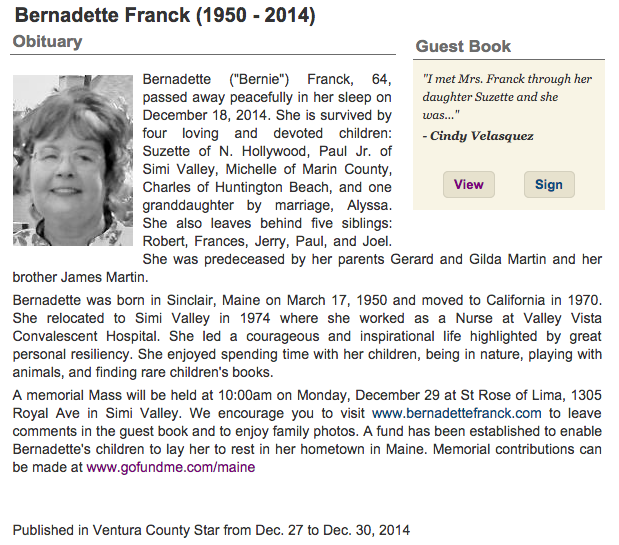 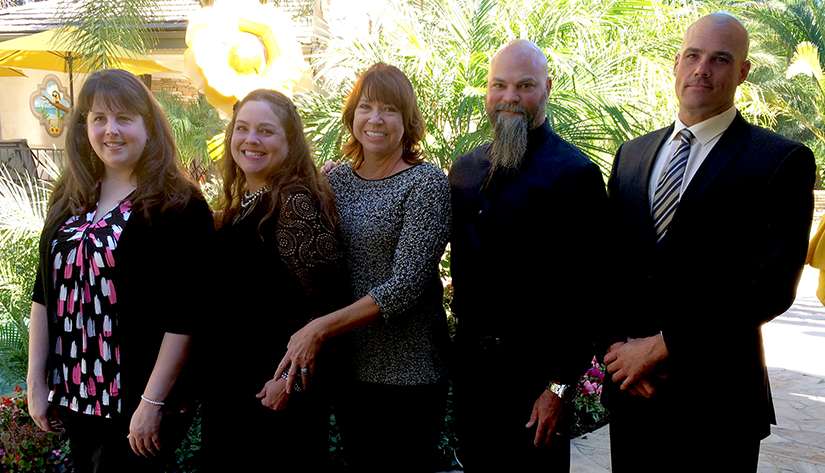 The final services for my Mom were perfect and beautiful. We had a Catholic Mass, and everyone participated and came together to arrange everything. My mother would be very proud of all of us all! We are pictured above with Debbie Thomas, my mom’s best friend, at her beautiful home in West Simi Valley, which she graciously offered for the final reception. END_OF_DOCUMENT_TOKEN_TO_BE_REPLACED

SIMI VALLEY, CA – Bernadette (“Bernie”) Franck, 64, passed away peacefully in her sleep on December 18, 2014. She was born in Sinclair, Maine on March 17, 1950 and remained there throughout her childhood. Bernadette was predeceased by her Father Gerard Martin, Mother Gilda (Michaud) Martin, and brother James Martin. She is survived by her four loving children: Suzette of North Hollywood, Paul Jr. of Simi Valley, Michelle of Marin County, Charles of Huntington Beach, CA and one granddaughter by marriage, Alyssa. She also leaves behind five siblings: Robert and his wife Jolene Martin of St. David, ME, Frances and her husband Patrick Pelletier of Vernon, CT, Jerry and his wife Mary Martin of Glastonbury, CT, Paul and his wife Susan Martin of Sinclair, ME, Joel and his wife Linda of Bristol, CT.

Bernadette graduated from Wisdom High School in Saint Agatha, Maine, Class of 1968. She then studied Vocational Nursing at Northern Maine Vocational Technical Institute in Presque Isle, Maine, Class of 1970. Bernadette went on to work as a Convalescent Nurse at Valley Vista Convalescent Hospital in Simi Valley. She retained an encyclopedic level of medical knowledge which she utilized throughout her life.

Bernadette moved from Northern Maine to Southern California in 1970. In 1974 she moved to Simi Valley where she raised four loving and devoted children. She led a courageous and inspirational life highlighted by great personal resiliency. She enjoyed spending time with her children, being out in nature, gardening in her yard, playing with animals, listening to Opera, reading, finding rare children’s books, playing games online, and playing Bingo with her best friend Debbie Thomas. She will be sorely missed by her family and friends.

A memorial Mass will be held in Bernadette’s honor at 10:00am on Monday, December 29 at St Rose of Lima Catholic Church at 1305 Royal Avenue in Simi Valley, CA 93065. Family and friends are encouraged to visit www.bernadettefranck.com to leave comments in the guest book and to enjoy family photos. Bernadette’s children have established a fund to enable them to travel back to her hometown in Maine to lay her to rest. Memorial contributions can be made at www.gofundme.com/maine.